As hard as it may be to believe, I, in certain ways, miss living in a house I own. This is only after a number of beers though; it comes slightly before I start missing Omaha, but only after I miss being an awkward adolescent. It’s at those times I look over and ask my wife if she thinks we should buy another house. It’s a good thing she holds her alcohol better than I.

All this reminiscing I’ve been doing during my reentrance into the web world has many people worried, most of all my dog Quimby (yes, we named him after the womanizing mayor of Springfield). Apparently I have him so worked up that now he’s afraid of water bottles. Ok, that may be a bit exaggerated (only a bit). The truth is, both worlds hold many similarities and I am therefore not completely crazy when I discuss the two of them over coffee (be really concerned if I start drinking coffee). It is actually quite easy to compare the world of home building to the world of web design. To help describe the similarities, I have asked an old friend back for an interview using the ever popular bold/unbold Q&A format.

Though it’s been a long time since Mr. Fix-it Guy has appeared in a column, he agreed to help as long as I don’t use any overly complicated words. Our original disagreement was over the use of the word juxtaposition…notice it was not used above. Or was it supralapsarianism?

Anyway, thank you, Mr. Fix-it Guy for coming back and sharing your brain smarts with us.     It’s not for you “buddy”, it’s only for your fine readers out there. Besides, it’s too hot to bicker now.

Agreed. Can you explain why it’s important to have multiple professionals work on a building project?     Actually, no. The whole notion that says it’s better for a team to work on a project don’t know what they’re sayin’. Just because one person can’t be an expert at both the creative world and mathematical world doesn’t mean they can’t design a house and also wire it electronically.

I’m not sure I understand what you mean. Please Explain?     No.

Ok, not for me. But for the readers?     I guess. Old wisdom has always said that it is better to use multiple experts on a project as opposed to a generalist. This is because one person cannot be an expert in everything. The skills that it takes to be creative are the exact opposite to the skills it takes to be programmatic. Someone who can wire electricity and handle all the minute details of a fuse box is probably not the best person to be giving interior decorating advice. That’s the old way of thinking. The new way, which I subscribe to says, “Sure, I can do that.” After all, who wants to share money? Isn’t it better to keep it all yourself?

Hmmm… That’s a good question, Mr. Fix-it Guy.     That’s why I became a generalist. Why be the best at something when you can be decent at everything? I don’t like to share money.

You make a good point. It sounds like your sales are going pretty well.     Well, not so much.

That’s too bad. I was hoping you would help me describe the similarities of home building with website design and development. Basically, the same kind of idea – how the design part is more like creative artistry and programming is all math. And don’t even get me started on coding languages.     What? Now I’m lost in your silly cyber space. And I haven’t landed a job in years! Any idea why nobody has been building new houses lately? 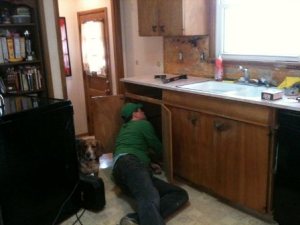