Since we are a firm of business coaches, I feel a burden of responsibility to warn you all of potential threats to your business. Our goal is to ensure the longevity and success of each small business owner with whom we work, and because of that, there is a vital news item that I must warn you about.

I have become convinced recently that the game Connect 4® is evil. You may think I have completely jumped off the cliffs of reality here, but do you know how many grams of carbohydrates are in each piece of that game? Ok, seriously, it is evil, and not just for the carb content. The effects of that game pull itself out of the fun and light-hearted past and into the scary present of the adult world in which we live and work. Take the story below about a guy named Rod Jones-Swatrzburg from West Spencer, Virginia, as published in the Secret Adult Gamer’s Monthly Circular.

“The online app version of Connect 4®, known to smartphone users as link4® has become quite a crazed sensation. With the ability to play games against live opponents any time of the day or night, countless people have succumbed to its temptations. At the center of our story is former business owner Rod Jones-Swartzburg. He started a fly-fishing business five years ago, specializing in fancy lures. His business was surviving, despite his self-admitted ability to market, and he was even getting close to being ready to hire his first employee. That is, until he downloaded the link4® app on his phone. Though the games only last a minute or so, he found himself losing hours at a time on his device. Hours turned into days; days turned into weeks; and unbreakable habits formed. Before long, no more lures were being made, supplies dwindled, and his store closed down. When interviewed next to the cardboard box he currently calls home, his only reply was, ‘May I borrow your phone for a minute?’”

This is obviously a tragic story of senseless over-obsession is a smart phone, but the temptation is real. The scariest part is that game is known as a “gateway game”. In other words, people that participate in the link4® world very easily find themselves deeper than they ever imagined, some even going all the way to the World of Warcraft® stage. According to a local gaming-health expert, “If a person walks through the online gaming door, it is rare that they are able to go back. There is a reason why the gaming community is growing exponentially (and gets used), while gym memberships grow exponentially, but never actually get used.”

Time is a precious thing, and it’s only worth spending in the right ways. It’s not renewable (such as money, carpet stains, and Charlie Sheen’s temper tantrums) and therefore must be treated with respect. Guard yourself, keep a constant watch on your profits, and never turn down a free apple pie. For these are where the rewards come.

That’s interesting, I just got a notification on my phone that someone wants to play a game…

A crumpled piece of paper sits quietly on the floor, its jumbled words holding a message of deep significance, yet silenced by a single hasty act. My dastardly scheme is succeeding; as long as it can survive in its spot until 5 o’clock, the paper’s message will be forever destroyed at the hands of the night-time clean-up crew.

Who am I? I am disorganization, your single greatest enemy to profitability. It is my goal to keep your business down, your efforts up, and your profitability in complete disarray. I keep you from putting away your files, from cleaning up your workspace, and from systematizing your production. I work alongside my good friends distraction, hurried, and anxious. The longer you keep from paying attention to the growing pile of stuff sitting in front of you, the stronger I become, and the longer it will take to put me down.

I thrive in environments of low accountability, low visibility, and low commitment. And it doesn’t take much to get me started. All I need is for you to leave that one item un-dealt with, giving me just enough space to flex my muscles. Oh, and no one is immune. I can break into any safe or any system you put up to protect against me. Why? Because I already live inside you.

I have one weakness and one weakness only – constant vigilance. A plan that you are completely committed to that does not allow for one thing, item, or piece of information to be left out of place. You may think you are a “natural organizer” or admit to obsessive compulsive behavior – but both of those are fallacies – obsessive compulsivity may lead you to clean up a lot, but that has nothing to do with organization. Good organization is not needing to constantly clean up your desk, as it stays clean through continual acts of organization.

I’m not worried. Very rarely do I come across someone who has the will to defeat me, which is probably a good reason why many small businesses fail, they just don’t do what it takes to stay organized. And how can they? They are probably taking too long looking for stuff, too busy catching up on work they under quoted, or too frayed because they are trapped under a pile of junk.

You think you want to fly? I keep you from walking. Besides, I can’t imagine why anyone would want to fly anyway; leave that for the birds. They don’t have to be profitable. 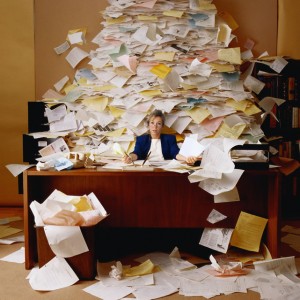 What exactly is small business? I’ve been pondering that question since joining Pro/Vision Coaching, as our target is clearly stated as a firm that coaches the “small business owner”.  One of the recurring themes in the answers I’ve found is that a small business is not necessarily able to fight for itself. Big business has its corporate lawyer divisions with lobbyists and special interest groups making sure that the interests of the company have every chance of succeeding. Even medium sized companies have that kind of ability—if not on the national level, then on the state and local levels—and every small business I find is without a doubt unable to force what’s best for them into being.

The SBA (Small Business Administration) has been one of the key players in the fight for the little guy. Their focus on helping small business and providing the small business owner the tools needed to survive in this marketplace has been has been the sling in this ever continuing David vs. Goliath struggle. Here is the truth: “small businesses have created 65 percent of all the new jobs in the past 17 years and employ half of America’s private-sector workforce” (AOL Small Business). As the backbone to the American economy, there is no doubt of the importance of organizations such as the SBA play in the lives of people all over this country.

Who exactly is the little guy? Defining the criteria for this sector is a vital process, as separating out who needs the help – and it is traditionally defined by amount of yearly revenue and number of employees. “The SBA sets its cutoffs based on either the number of employees or average annual receipts. Previously, $7 million in annual revenue was the cutoff for most industries” (Entrepreneur Daily Dose). What this cutoff does is protect the small businesses inside that range by providing resources and a voice, as the larger companies have the resources to accomplish it themselves.

What if the larger companies were privy to the resources and help that the small businesses were? Herein lies the danger for small business. If Goliath were prepared with his shield to protect from a projectile attack (and the respect for his challenger), the outcome could have turned out far worse for David. This is a danger that every small business must now prepare for, as “the SBA boosted that cutoff to more than $35 million for some business types. The result is that 18,000 more businesses now can seek help from SBA in obtaining federal contracts and loans” (Entrepreneur Daily Dose).

If a bigger business has the resources to take care of those needs, yet are able to save their own resources and use the SBA it causes to ripples of effect: 1) big business has even more resources with which to defeat their smaller competition, and 2) small businesses have much less. Imagine taking away David’s sling and giving it to Goliath – not a pretty picture.

It is not the purpose of this article to guesstimate as to why the SBA is making such drastic changes to the businesses they help – there are both positive and negative aspects to this decision. The challenge, however, is clear – small business just got thrown into a larger pond with bigger fish and less total resources to go around. Be prepared to get less help from Uncle Sam next year.